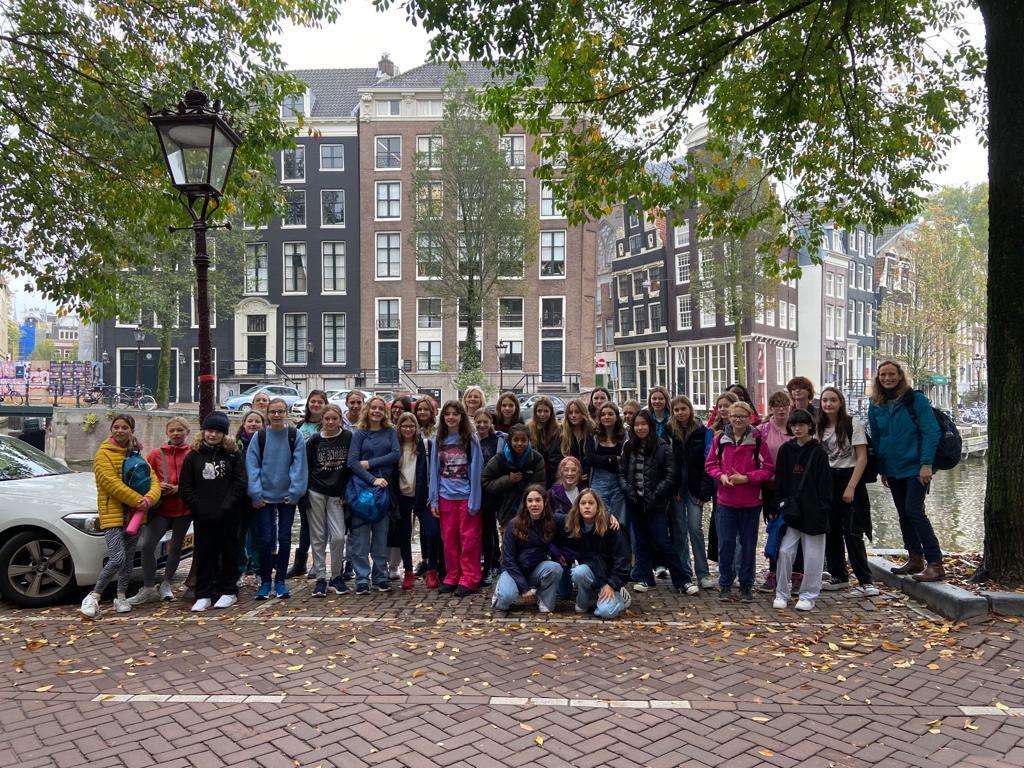 Thirty-four lower school students spent a busy four and a half days in Amsterdam this half term. The theme of the trip, led by the Religious Studies department, was exploring how several Jewish communities found sanctuary in Amsterdam from the 16th Century onwards, how they contributed to the success of the republic, and how the Holocaust impacted the community.

We visited the extraordinarily fine 16th century Portuguese synagogue in central Amsterdam and the fascinating Jewish Museum, including the wonderful interactive children’s museum, both of which introduced us to Jewish culture and religion as it has been lived and experienced for over 400 years in Amsterdam. The students also visited Anne Frank’s house where they participated in an educational workshop which opened their eyes to the destructive power of prejudice and discrimination. One of our party, Olivia, had a family connection to the Frank family, so this was a particularly significant visit for her. This was followed by a tour of The Netherlands’ National War Memorial at Kamp Vught, on the site of a former Nazi transit camp. It was witness to brutal events and the students, who listened intently to their guides throughout, were suitably sombre during and after this visit, writing personal reflections to add to the memorial wall.

Our trip included other cultural highlights which were less sombre! Experiencing Amsterdam’s trams first-hand, we visited the impressive van Gogh Museum, as well as the fascinating Rembrandt’s house museum, where the students enjoyed learning about paint composition hands-on. The National Maritime Museum was a delight, with the students having fun climbing all over an East Indiaman tall mast ship and using VR headpieces to learn about how this type of ship traded with its colonies making Amsterdam one of the most powerful trading cities of Europe.

The museum which impressed the most was the obscure Museum of the Canals in a glorious mansion on the Golden Bend of the exclusive Herengracht canal, which had amazing interactive and imaginative displays recounting the history of the development of the city. The students had to be dragged out of the room with the interactive doll’s house with holographic residents from across the centuries! We saw directly how Amsterdam expanded and continues to expand, on a very informative canal cruise on the first afternoon, and on our last before heading for the airport, we visited a traditional Dutch farm outside Amsterdam where we saw clogs and cheese being made, with Lavinia being a very able assistant to the clog maker!

Overall, the students were a credit to Godolphin, and they will take away powerful and happy memories of the trip.