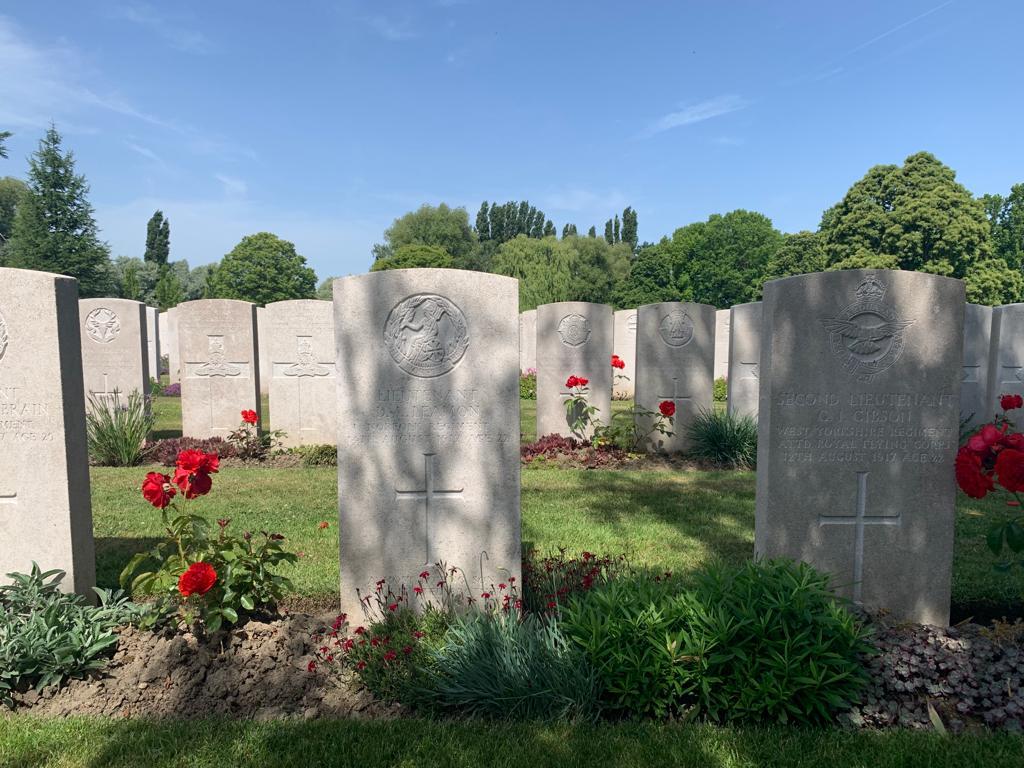 The Godolphin Battlefields Trip left for France and Belgium on Thursday 16 June with 37 girls and four staff together with a familiar face in the form of David Barron – a regular invigilator for our public exams – as our guide from Anglia Battlefield Tours. After a good journey, we arrived late at our nicely appointed hotel on the Franco-Belgian border.

Our first full day saw blistering temperatures but very happy and engaged girls as we visited Lijssenthoek cemetery – the second-largest Commonwealth War Grave Commission cemetery in the world with 11,000 graves – followed by very a very interesting visit to Bayernwald where the girls walked through some preserved German trenches and learnt about some of the realities of trench warfare and routine in the trenches. We had lunch in a small battlefield cemetery very close by where the trees afforded good shade from the sun. This cemetery held about 40 graves of young British soldiers killed in an attack on the very trenches we had walked through earlier. It was a truly beautiful place and we agreed that the boys who died here would be very pleased indeed to hear the excited, happy chatter of the girls who visited them. It was very moving!

This was followed by a visit to the evocative Hill 60 where the effects of tunnelling and the underground war could be seen as well as the devastating effect of shellfire. We also had a very interesting (and amusing) demonstration of the evolution of gas masks in the war!

The day was rounded off by a visit to Ypres where the girls enjoyed ice creams and the very emotional Last Post ceremony at the Menin Gate where three girls – Annie, Georgie and Millie laid a wreath on behalf of the School and parents. Several girls were also able to lay crosses for relatives.

The second full day (Saturday) began with a visit to the Hooge museum where the girls were treated to a fantastic museum visit, a great talk from David on medicine in WW1 and a stretcher demonstration and a walk through a preserved British frontline trench. We chose not to walk from here to Railway Wood as it was simply too hot but enjoyed the chance to listen to some love letters from a young officer killed in a tunnelling operation under the wood. We also visited a tiny cemetery in Ledgehem to listen to Ella C. read the citation for the Distinguished Conduct Medal awarded to her very brave relative for his actions in that place in October 1914. He also lived to tell the tale!

We then went to Langemarck German cemetery where Mr Leang gave a very interesting German perspective on the war and its remembrance there and we then went to Tyne Cot cemetery (the largest CWGC in the world with 12,000 graves and the names of 37,000 others who have no known grave). Several girls were able to lay crosses here for relatives who died in the area. A lovely walk around the ramparts of Ypres for some preceded dinner and then back to the hotel (after chocolate shopping, of course!) for bed.

The last day saw a visit to the preserved Canadian battleground at Vimy ridge with its striking memorial, pock-marked fields and preserved trenches before a brief but moving visit to the French cemetery at Notre Dame de Lorette and the Ring of Remembrance which has the names of over 580,000 men of all nations who died in the Nord de France area. Then it was time to get back on board the coach and head for home. 37 exhausted but happy girls were delivered back to school at 10.00pm on Sunday night.