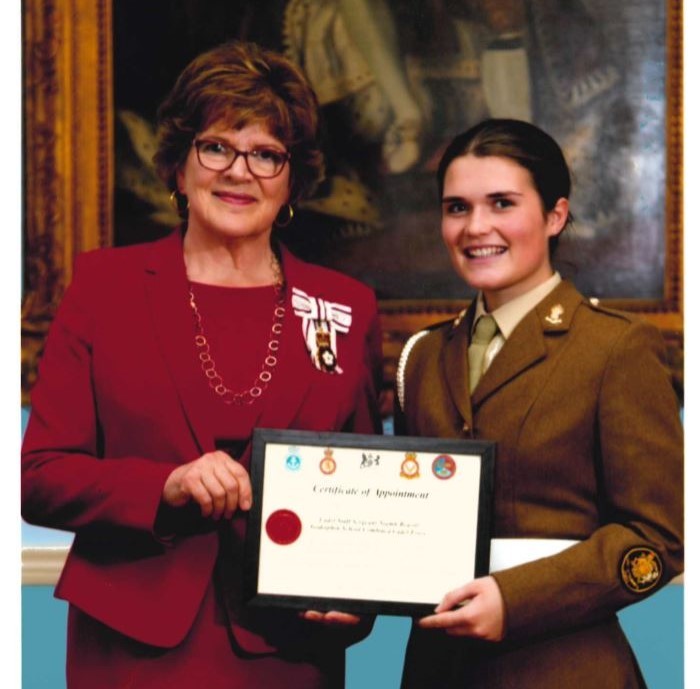 Tuesday 16 October marked a special day for one of our Godolphin students, Niamh Reavill. Niamh was appointed as Lord Lieutenant Cadet for the Lord Lieutenant of Wiltshire, Mrs Sarah Troughton, at a ceremony that took place at Devizes Town Hall. This prestigious award means Niamh will be invited to public events around the County where she will provide assistance to the Lord Lieutenant. This could include Royal Visits to the County and significant civic events.

This annual award is presented to the recipient who has shown significant dedication to the cadet movement as a whole. They must be good at what they do, smartly turned out, show enhanced leadership skills and be a positive influence in the cadet community. Niamh is definitely deserving of this award as she has attended five months of cadet residential courses and camps over the years as well as nearly 40 additional weekends. Niamh has been the top student in two reputable senior cadet courses and the leader of a Ten Tors challenge team at both 35 and 45 miles. Niamh comments “I have been so lucky to have the diverse experiences that I have had through the many opportunities provided by the cadets – both ACF and CCF.”

Having grown up in a military family, Niamh is no stranger to a military lifestyle. Both of Niamh’s parents were in the Armed Forces, as well as both of her grandfathers and three of her uncles. Niamh herself, the current Head of CCF at Godolphin School, “would recommend Army cadets to anyone – whether you plan to join the military or not” and would like to see the CCF grow across the school over the next year. At this moment in time, Niamh is not set on joining the Armed Forces and plans to take a gap year before deciding, however it is an option for later on in her life.