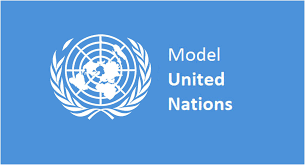 "On Saturday 6 March a group of Godolphin students participated in the virtual MUN Conference 2021. I chose to be in the disarmament committee and wrote my resolution on terrorism and Weapons of Mass Destruction. As a School we were representing Tunisia and I found it really interesting to research this country and its background, having known nothing about it before. On the day there was a short opening ceremony before we went into our individual groups. In my group we discussed the topics Terrorism and WMD and the weaponisation of outer space. The debates lasted for two hours where we discussed other countries resolutions and possible amendments. After lunch we then had an emergency scenario where I participated by making an amendment which then got picked. This meant that I had to defend my amendment and it then got debated. After a vote my amendment was passed which meant it got added to the resolution which I was very pleased about as at first it was quite scary to talk in front of 30 other strangers online.

I really enjoyed seeing all the other countries viewpoints and how other people debated. I think that by doing MUN it helped improve my public speaking skills and my confidence to just have a go as before I was quite nervous and worried to speak. Overall I found the whole experience very interesting and worth-while and would definitely recommend doing it to others as I learnt a lot." Olivia Jones. Lower Sixth Student.

"For MUN this year Godolphin was chosen to be Tunisia and I chose be our representative on the Human Rights Committee. This involved researching either Human Rights in Russia or the position of the Uighurs in Xijiang. I did the Uighurs and learnt some very interesting but also quite worrying points. When the day came, I was nervous, especially as we were doing it on Teams but the day went without a hitch. I thoroughly enjoyed the debating and after a while even felt brave enough to make a couple of points. In the afternoon we were given a crisis scenario and had to decide how our countries would react. The crisis for the Human Rights Committee involved the Myanmar Coup from February 2021 and I had an amendment passed which was very exciting! Overall, it was a hugely interesting and fun day and I learnt a lot about the course of debates and how to think and make decisions which I wouldn’t necessarily agree with." Georgie Way, Lower Sixth Student.