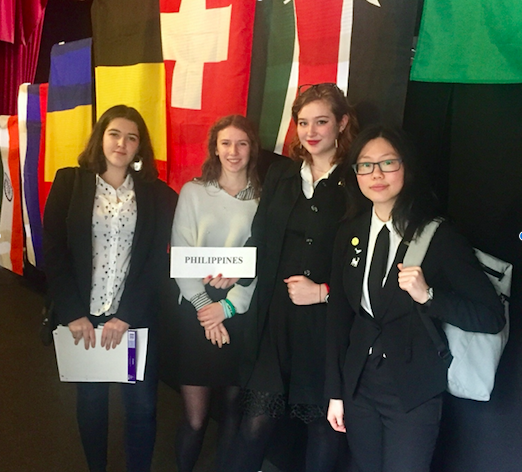 Over the weekend of the 1st-3rd March Lower Sixth students, Sophie Hutchins, Vincci Chung, Summer Cubitt, and Jemima O’Reilly attended the 28th Bath International Schools MUN hosted by Kingswood School. At the Opening Ceremony, guest speaker, Angus Forbes, addressed delegates. As the founder of Bankers Without Borders, Forbes gave some bleak statistics about climate change and called for the development of a worldwide organisation to combat its effects. He also let slip that he is the husband of ballet dancer, Dame Darcy Bussell!

Following the ceremony, students attended their individual committees. Godolphin students stood on both Human Rights committees, the Heath Committee and the Environment Committee. In each of these committees the students acted as delegates of the Philippines and debated issues taking that country’s stance.

In the Health Committee, issues such as mental health, obesity and anti-microbial resistance fully engaged delegates, leading to incredible discussions and heated debates. Delegates from other countries proposed veganism as a cure for obesity and, in response to an imagined emergency scenario, suggested that the use of nuclear bombs would be appropriate to prevent the spread of biochemicals following an attack on two major European airports!

Human Rights Committee 1 debated issues concerning the use of torture, press freedom, religious freedom and the rights of the disabled. These debates shed light on highly significant issues that currently pose an international challenge, especially in the light of recent world events. Jemima O’Reilly was able to debate the importance of press freedom in keeping governments in check and was also able to pass several amendments to alter resolutions. The Committee finished up by debating joke resolutions, calling for a religious Hunger Games in Siberia and passing a resolution that made short hair a disability.

As for Human Rights Committee 2, LGBTQ+ rights, women’s rights, internet freedom and human right violations in Russia were discussed. Vincci Chung’s resolution on LGBTQ+ rights was chosen and she had to present it to the Committee, making a valuable contribution to the heated debate. The delegate of Zimbabwe, in particular, preached about national sovereignty at every opportunity in order to quash debate and it was unanimously decided that the delegate of Russia was most likely to end up in prison for his contraventions of debating procedures. Notes passed, during proceedings, to and from the delegate of the Dominican Republic, kept the Committee’s runners busy throughout the weekend.

Sophie Hutchins, serving on the Environmental Committee discussed the issues of climate change, deforestation and marine plastic pollution. There were many colourful debates with delegates speaking passionately about issues affecting their counties and devising innovative solutions through the resolutions and subsequent amendments. There was an unlikely alliance between the Russian and Filipino delegates; Philippines encouraged Russia to protect its motherland from nuclear fallout despite the countries having not having a similar agenda in any way shape or form!

Godolphin students thoroughly enjoyed a weekend during which they grappled with world issues, stepped outside their comfort zone to contribute to debate, helped shape policies and most importantly made many new friends equally engaged in international concerns.