Gifted and Talented writing workshop to set the creativity flowing 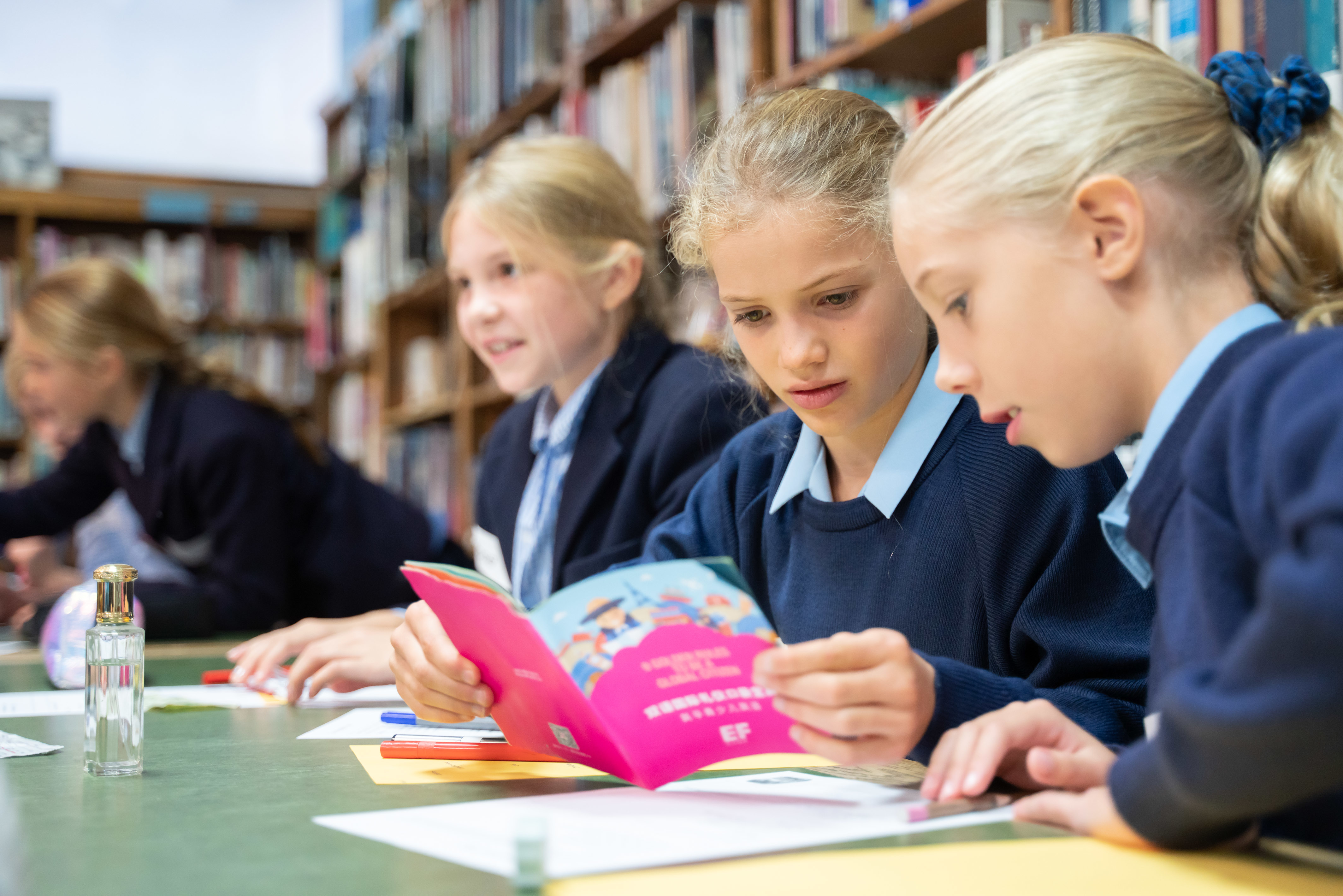 During our Literary Festival in October, Gifted & Talented girls spent a morning at Godolphin learning creative writing skills with two expert Godolphin staff, as part of the Godolphin Outreach Programme. Ms Williams and Mrs Smallwood inspired the girls to produce imaginative pieces of writing based on an intriguing stimulus: a bag. We have chosen our favourite character portraits and opening paragraphs to share with you below.

Photographs of the workshop can be found here.

I stopped and stared, what I saw is something I hoped I would never see. I was frozen to the spot, I couldn’t take my eyes of the limp, frail body in front of me. He was just lying there. It was like he had just given up on life. I couldn’t think how horrid it must have been for him. Dying in this old, creaky and unforgiving house. I nudged his leg lightly and something rattled. I got very curious and moved his leg completely and something fell out of his pocket. I had a look at the object, it was an old pocket watch. I looked at the date it showed. It said 2005. I was gobsmacked. He had been here for 14 years. I put the watch in my pocket and carried on through the house, despite how afraid I was.

I think the person was a lost traveller. They were probably going from country to country looking for goods. I think that they had a map of a train station because they wanted to get out quickly like they were being tracked down. She must have dropped her bag in the rush. This happened 3 years ago because it happened in 2016. On Friday the 1st she went to the Republic of Ireland.

One gloomy, rainy day a young lady with light blonde hair strode across the road. It was cold and windy. She was headed for the airport. She had a very old, ornate suitcase, a dark skirt, black dress and a lovely, shiny pearl necklace. She also carried a dark handbag as black as the night sky. She put her bag down and looked at the time. She broke into a run, leaving her handbag.

I think she is quite a rich lady with blonde hair, a pearl necklace. I think her uniform has: a blue skirt, shirt, black shoes. I think she is around 30 and is neat and tidy. She likes chocolate and has a pretty figure. She has a small pair of glasses.

It was a dark, gusty evening when a rather old traveller stepped into the gloomy wood. Her name was Edie. She was looking for somewhere to sleep for the night, perhaps a long, towering tree trunk to stop her getting wet. As a traveller Edie did not have a real home, she often slept at the bottom of towering trees or just on a patch of grass. As she peeked through the vines she could hear a small, echoing voice. Despite how she was feeling she carried on. As she sat down she could hear the echo getting louder and louder. Now she ran. She ran as fast as her wobbly legs could take. When she could no longer hear the echoing voice she came to a halt. But something did not seem right. Edie got given an old, black bag just before her son Charlie had died. It was the only possession she had carried on her travels across the world.

I was running, running as fast as I could. I could see the sun setting over in front of me. Run! I shouted but in my head I could hear the police shouting ‘come back blonde hair!’ That is what the police call me just because I’ve got blonde hair. I ran into the elegant church, but unluckily, the church was in full song. The melody was stuck in my head now, the constant repeating of the organ in this cold room. I knew the police were going to come in here at some point. The organ had stopped. Thank God. The vicar was talking but stopped, his face turned as white as a sheet of paper. I heard the doors at the back of the church open and I moved, slowly at first but with delicate speed I got my pocket watch out of my bag and checked the time. I would get out of here as soon as possible. I ran down the aisle and onto the street. I ran into the graveyard. I could see stones with writing I could not understand, I didn’t need to though. As I walked out of the shelter, wind mixed with snow and rain slapped my face.

Sweat poured down my face in an everlasting waterfall as I ran from my pursuers. My tawny, knotted hair flew behind me in the rushing wind. The veins in my hand were burning as I clutched my ebony bag closer. Footsteps were gaining on me and the grinding voice of a policeman roared in my ears “Come back here you scamp!” An ornate, carved door stared at me as I made my way hurriedly towards it. I stopped just in front of the door and swivelled round and, to my great surprise saw no sign of the officers. I gladly took a deep breath and swung the door open. Then they came upon me, their long arms reaching into my bag scrabbling about for something. Quick as a flash I pulled out the tattered, stained cord and ran for my life. One I was clear of them I put my hand to my shoulder and felt for my bag. But it was gone. In horror I reached into my pocket for the cord and there it was. I was so relieved that I fell top my knees weeping. When I came up I looked around me and saw that on the trees ruby, amber and yellow leaves were hanging limply onto the sodden branches.

Once a loud grandfather clock rang at 12:00 at night. All around it were smooth and squeaky floors with ancient doors leading in and out of the room. Train noises from the colourful autumn day outside. It smelt like a smoky fireplace, which it was. There was a scream “Help! Help! I’m stuck!” The scream came from inside a door, the door was broken down and looked very old, the door was covered in ornate patterns on the front. “Ahhh!”, the cry shouted again, something’s happened, something extremely bad.

The next thing I knew I was walking towards the door covered in ornate patterns. I can’t believe I was about to open the door. I mean would you do that? When I opened it a loud CREAK came out of the door into my ears. Inside the room was a spiral staircase as long as the tallest giraffe. Next to the spiral staircase were a pair of blue sliders that were very small.

Suddenly, my body was moving again without me telling it to towards the staircase and up I climbed, it was like the staircase had no end to it, when I could just see the top of the stairs a ball came flying down.

His name I think is probably James he likes fiddley toys to play with. He’s probably a boy about 6 or 7 years old. He might be trying to sell some of his old things to make money to buy food. I think he got burgled and he ran away and left his bag full of things. I think he is kind of into lego and superheroes. He lived quite modestly, he probably had a friend or sibling with him and had half a battleship each but they got separated and he is probably super sad. His hair is dark brown with bits of curly blond at the end. He’s really into sports, mainly football. He has brown freckles on his pink, rosy cheeks. He likes any animal, especially snakes.

Her two protruding eyes stared up to the gloomy moon as bullet of crystal tears flowed down her slender face. Ink squirted carelessly across the yellowish parchment as she wrote hopefully. Her candle twinkled as it grew dark in the night air. The disgusting smell of firewood filled her nostrils until she could bear it no longer. Her neat pearl necklace laced around her neck where dark wavy hair flowed down her chest like a cat creeping up to a mouse. A navy dress hung over her skeleton-like frame, popping down her knees. This young woman was called Mary. She had committed a dangerous, ancient deed, she had murdered her own mother, and only evil magic could have caused such a terrible fate. But because of this deed there were consequences, the police had taken her in but she announced with a buzz of protest she had not committed the crime for all these serious events Mary decided to sacrifice her deadly body.

A rich, wealthy middle aged woman wore a glistening, beautiful pearl necklace. She works as an air hostess and travels day and night. She travelled to London in the UK, and lived in a hotel in room 420. Her credit card is from Italy where her background states. Her two protruding eyes stared up to the full moon as she writes a postcard to her fellow friends with bullets of tears wafting down her face. A long black dress hung over her sharp, strained shoulders with wavy brown, slender hair creeping down her chest like a cat creeping up to a mouse.

'Teaching in a time of Covid', an article by Mrs George

A great week full of opportunity for Sixth